18 Years Stranded at an Airport 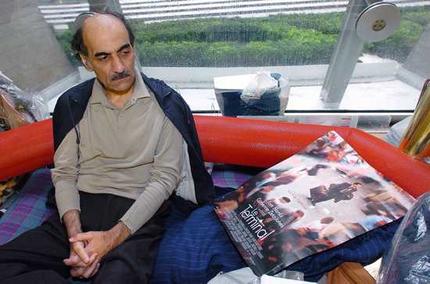 Born in 1942, Mehran Karimi Nasseri (Sir Alfred) is an Iranian refugee who lived in the departure lounge of Terminal One in Paris Charles de Gaulle Airport from 26 August 1988 until July 2006, when he was hospitalized for an ailment.

His 2004 autobiography, “The Terminal Man,” was the inspiration for “The Terminal,” a film starring Tom Hanks about Victor Novarski, a man who arrives in New York City from a politically unstable Eastern European country. Due to collapse of the government, Novarski’s identification papers are no longer valid, and he is forced to remain in John F. Kennedy International Airport as a man without a country.

Ironically, Alfred remained stranded at Charles de Gaulle when “The Terminal” was released in 2004.

Alfred claims he was expelled from Iran in 1977 for protests against the Shah. After a long battle involving applications with several countries, the United Nations High Commissioner for Refugees awarded him refugee status in Belgium.

Having claimed to have one British parent, although he produced no evidence to support this, Alfred decided to settle in the United Kingdom in 1986, but en route there in 1988, his papers were lost. Despite this setback, he boarded the plane for London but was promptly returned to France when he failed to present a passport to British immigration officials.

Alfred was initially arrested by French authorities and released as his entry to the airport was legal and he had no country of origin to be returned to. He began his 18-year residency at Terminal One in Paris Charles de Gaulle Airport. 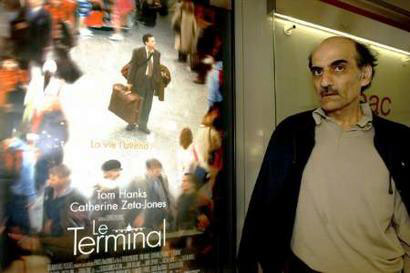 French human rights lawyer Christian Bourget later took on his case. In 1992, a French court ruled that having entered the country legally he could not be expelled from the airport but it could not grant him permission to enter France. Attempts were made to have new documents issued from Belgium, but Belgian authorities would only do so if Alfred presented himself in person.

Under Belgian law a refugee who voluntarily leaves a country that has accepted him cannot return. In 1995, Belgian authorities granted permission for Alfred to return, but only if he agreed to live in Belgium under supervision of a social worker. He refused on the grounds of wanting to enter the United Kingdom, as originally intended.

Alfred spent his time reading, writing in his diary and studying economics during his 18-year residency at Terminal One in the airport. He received food from airport employees.

His stay at the airport ended in July 2006 when he was hospitalized and his sitting place in the airport was dismantled. Alfred left the hospital in January 2007, and was cared for by the airport’s branch of the French Red Cross. He was lodged for a few weeks in a hotel close to the airport. On March 6, 2007, was Alfred transferred to an Emmaus charity reception centre in Paris’s 20th arrondissement.

Today, he lives in Paris.